Welcome to Chasabl, the next generation in social networking and dating for chubby and beary men and the men who love them!

On Chasabl, big isn’t just beautiful—it’s downright sexy! This is a site for two kinds of guys: Big men (chubs, chubby bears, bears and superchubs) and the men who love them. It’s a site for chasers who spent their childhoods admiring the chubby kid in class or big handsome men like John Goodman on TV. And it’s a site for chubby guys, regardless of their size, shape or color, who want to find that special connection or passionate experience with someone who thinks they’re the handsomest, sexiest man alive. This is a site for doctors, lawyers, waiters, students, retirees, businessmen, truckers, dog-walkers, filmmakers, entrepreneurs and everyone in between. And it’s for guys of every size—from skinny to chunky to superchub. But ultimately this site is for anyone who feels they belong here.

Chasabl is part social network, part personals. We've blended the best of both worlds—allowing users to connect with their friends and also seek out the kinds of guys they like for dates, romances, hook-ups or friendships. Typically, we’re forced to fit into overly-broad boxes—“chub,” “chaser,” “bear”—but attraction is often more complex than one characteristic. Chasabl is a site in which the labels can take a back seat, allowing you to set basic criteria for the kinds of guys you typically like and then filter your experience—from the newsfeed to photo lists—to connect you to those guys faster and easier than ever before.

We decided to call our website Chasabl because we think big men—chubs, superchubs, chubby bears, bears and everyone in between—are some of the most chasable guys out there. We wanted to put the emphasis on the desirability of big men, men who sometimes doubt their own attractiveness in light of social norms that constantly put them down. At the same time, we know that chasers aren’t the only guys who do chasing! Plenty of chubs and bears have been known to pursue the guys they like too. The name Chasabl helped us appeal to both sides of the equation while alluding to a deeper desire of all our members—to chase their happiness.

In order to be self-sustaining, Chasabl offers a paid premium option known as Chasabl+. By paying a small monthly fee (as low as $2.50 per month), Chasabl+ members have access to special features, unlimited photo viewing and uploading and unlimited e-note use. But it's also important to the Chasabl team that non-paying members can actively engage in the site as well. That's why regular members still have access to basic features (including updating their profiles, posting wall and photo comments, private messaging and more) and are able to view a limited number of photos each day. 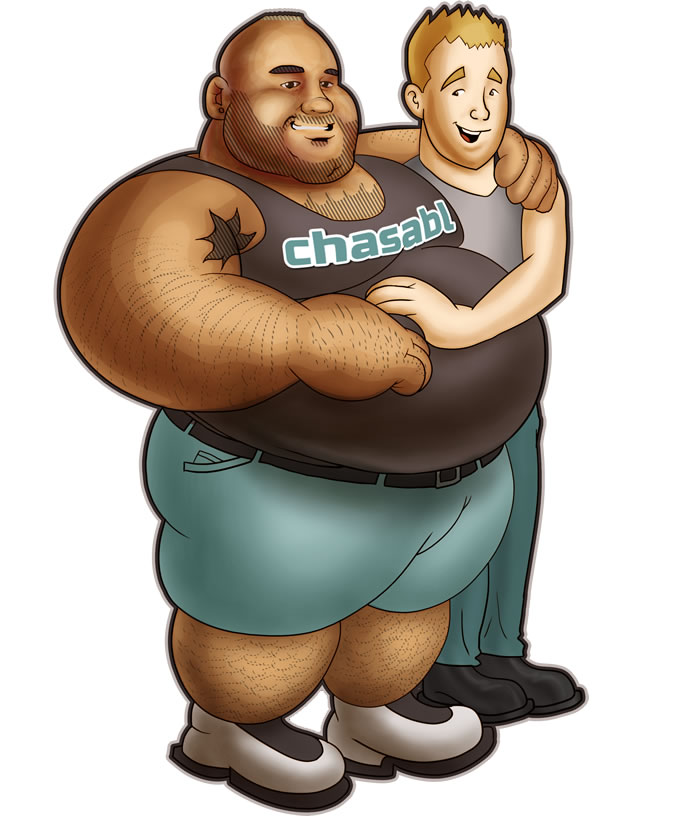